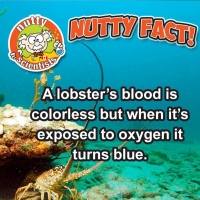 Varieties of blood colors found in our animal kingdom.

Did you know….. Lobster’s blood is colorless but when its exposed to oxygen its turn BLUE.

Like Lobsters Snails, Octopi, Spiders and Crustaceans and some Insects also have BLUE blood due to the presence of hemocyanin (copper rich protein) which contains copper. The reason for the blue color is, unlike humans, the oxygen carrying portion is copper based and not iron based.

In contrast, vertebrates and many other animals have red blood from iron-rich hemoglobin.

Interestingly surprise from nature does not stop here…

Some segmented worms, Leeches and marine worms has GREEN Blood.

Some marine worms like Peanut, Brachiopods has VIOLET blood too.

When you ask, what blood color is?  Most commonly answered is RED. But red is NOT only color fund in animal kingdom. There are whole variety of rainbow available in nature. Blood also fund in RED, BLUE, GREEN, VIOLET and even some colorless variety, too.

All different varieties of coloring because of different organism have different proteins. The different coloring matters of blood (HEMO-CHROME) is largely due to the protein in the blood responsible for transporting oxygen.

Isn’t it interesting to knowabout varieties of blood color? At Nutty Scientists Canada, we love to explore nature and science behind the facts.