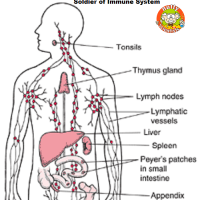 Soldier of our Immune system

As we knew that without an immune system, a human being would have been exposed to the harmful influences of pathogens or other substances from the outside environment.

In our previous blog, we have discussed how the immune system work within our body, NATURALLY.

Here we like to discuss more on HOW our immune system work by itself, WHAT body organs are part of the our amazing system of our body defensing with bacteria and viruses and keep it up and running strongly.

Let’s find out who they are and what are their role in support to our IMMUNE SYSTEM?

As we know that our Immune system works through our LYMPHATIC SYSTEM, which has main function is to remove the extra or excess fluids from ALL body tissue, absorption of fatty acids and subsequent transport of fat, chyle, to the CIRCULATORY SYSTEM and production of immune cells (such as lymphocytes, monocytes, and antibody producing cells called plasma cells)

As blood moves through body arteries and veins, 10% of the fluid filtered by the capillaries, along with vital proteins, becomes trapped in the tissues of the body. The loss of these fluid (approximately 1-2 liters/day) would rapidly become life threatening if the lymphatic system did not properly function.

The LYMPHATIC SYSTEM is a network of very small tubes (or vessels) that drain lymph fluid from all over the body. The major parts of the lymph tissue are located in the BONE MARROW, SPLEEN, THYMUS GLAND, LYMPH NODES, and the TONSILS. The heart, lungs, intestines, liver, and skin also contain lymphatic tissue.

The Lymph system interfaces throughout the body with the DIGESTIVE SYSTEM, RESPIRATORY SYSTEM, CIRCULATORY SYSTEM AND IMMUNE SYSTEM.

Here is some basic info on the part (solders) of our IMMUNE SYSTEM, you may be interested to know.

The tonsils (palatine tonsils) are a pair of soft tissue masses located at the rear of the throat (pharynx). Each tonsil is composed of tissue similar to lymph nodes, covered by pink mucosa (like on the adjacent mouth lining). Running through the mucosa of each tonsil are pits, called crypts.

The tonsils are a set of lymphoid organs facing into the aerodigestive tract, which is known as WALDEYER’S TONSILLAR RING and consists of the adenoid tonsil, two tubal tonsils, two palatine tonsils and the lingual tonsils. THESE ORGANS PLAY AN IMPORTANT ROLE IN THE IMMUNE SYSTEM.

The main function of tonsils is to trap germs (bacteria and viruses) which you may breathe in. Proteins called antibodies produced by the immune cells in the tonsils help to kill germs and help to prevent throat and lung infections. Tonsils are lumps of soft tissue and are part of the immune system. Tonsils vary in size from person to person. You can normally see your tonsils by opening your mouth wide and looking in a mirror.

Adenoids are made of similar tissue and are also part of the immune system. They hang from the upper part of the back of the nasal cavity. Adenoids get bigger after you are born but usually stop growing between the ages of 3 and 7 years.

You cannot see your adenoids. If needed, a doctor can look at the adenoids either by using a light and a small mirror held at the back of the mouth, or by using a small flexible telescope. Like tonsils, adenoids help to defend the body from infection. They trap bacteria and viruses which you breathe in through your nose. They contain cells and antibodies of the immune system to help prevent throat and lung infections.

Though the thymus is a little-known organ in the body, but it does play some very important role with our lymphatic system, along with the tonsils, adenoids and spleen, and it's also part of the endocrine system of our body.

The thymus is located just below the breast bone. It is relatively large in infants and grows until puberty. In adulthood, it starts to slowly shrink and become replaced by fat, according to the National Institute of Neurological Disorders and Stroke. It can weigh only 5 grams in elderly adults.

The spleen is the largest organ in our lymphatic system. The important organ for keeping bodily fluids balanced. The spleen is located under the ribcage and above the stomach in the left upper quadrant of the abdomen. A spleen is soft and generally looks purple

The spleen is responsible for the production and maturation of IgM, B lymphocytes, and opsonins. The spleen also acts as the primary reservoir for platelets and as a filter for red blood cells (RBCs), removing damaged or malformed red blood cells from the circulation. In addition, the spleen performs extramedullary hematopoiesis. Unlike the lymphatic sinuses of a lymph node, the spaces in the spleen, called venous sinuses, are filled with blood instead of lymph.

The spleen plays a significant role in hematopoiesis and immunosurveillance. The major functions of the spleen include clearance of abnormal erythrocytes, removal of microorganisms and antigens as well as the synthesis of immunoglobulin G (IgG). The spleen also synthesizes the immune system peptides properdin and tuftsin 6). Also, approximately one-third of circulating platelets are stored in the spleen.

The spleen contains lymphocytes and another kind of white blood cell called macrophages, which engulf and destroy bacteria, dead tissue, and foreign matter and remove them from the blood passing through the spleen.

The appendix is a small, pouch-like sac of tissue that is located in the first part of the colon (cecum) in the lower- right abdomen. Lymphatic tissue in the appendix aids in immune function. The official name of the appendix is veriform appendix, which means "worm-like appendage."

The gut rewards these microbes by feeding them and keeping them safe. The scientists believe that the immune system cells located in the appendix have the function of protecting the good bacteria. William Parker, Ph. D., and team have been observing the interplay of these bacteria in the intestines

It is usually considered a pointless, vestigial organ, but may actually serve as a reservoir for beneficial gut bacteria, according to researchers at Midwestern University in the US state of Arizona

The function of the appendix seems related to the massive amount of bacteria populating the human digestive system, according to the study in the Journal of Theoretical Biology. There are more bacteria than human cells in the typical body. Most of it is good and helps digest food.

For the thousands of people who have had their appendix removed, they’ve not experienced any negative health consequences.  Recently however, evidence has emerged suggesting that the appendix is not as useless as once thought, according to a team of scientists at Duke University it does serve a purpose . The appendix "acts as a good safe house for bacteria," said Duke surgery professor Bill Parker, a study co-author.

A lymph duct is a great lymphatic vessel that empties lymph into one of the subclavian veins.

There are two lymph ducts in the body—THE RIGHT LYMPHATIC DUCT and THE THORACIC DUCT.

THE RIGHT LYMPHATIC DUCT drains lymph from the right upper limb, right side of thorax and right halves of head and neck.

THE THORACIC DUCT: The thoracic duct is the largest lymphatic vessel within the human body, and plays a key role in the lymphatic system. It is also called the left lymphatic duct or the alimentary duct. The duct arises from the combination of the left and right lumbar trunks and the intestinal trunk in the abdomen.

Lymph nodes are small solid structures placed at varying points along the lymphatic system such as the groin, armpit and mesentery and work as FILTERS for harmful substances. They also contain both T and B lymphocytes as well as accessory cells and are primarily responsible for mounting immune responses against foreign antigens entering the tissues. Lymph nodes are situated at strategic positions throughout the body and serve to filter the lymph. They contain immune cells that can help fight infection by attacking and destroying germs that are carried in through the lymph fluid.

Peyer's patches are small masses of lymphatic tissue found throughout the ileum region of THE SMALL INTESTINE. Also known as aggregated lymphoid nodules, they form an important part of the immune system by monitoring intestinal bacteria populations and preventing the growth of pathogenic bacteria in the intestines.

Most people have between 30 and 40 Peyer’s patches, and younger people tend to have more than older people.

Everything we eat eventually makes its way to our small intestine. Our body doesn’t recognize foods as foreign substances due to something called oral immune tolerance. This refers to the inhibition of immune responses to certain antigens. Your Peyer’s patches are frequently sampling material within your small intestine, so they likely play a role in determining which substances require an immune response. No one’s sure about the exact role of Peyer’s patches in this process. Peyer’s patches likely play some kind of role in the development of oral immune tolerance, but researchers are still figuring out the details.

Peyer’s patches are roughly egg-shaped lymphatic tissue nodules that are similar to lymph nodes in structure, except that they are not surrounded by a connective tissue capsule. They belong to a class of non-encapsulated lymphatic tissue, lymphatic nodules

The bone marrow is extremely important to the immune system because all the body's blood cells (including T and B lymphocytes) originate in the bone marrow. B lymphocytes remain in the marrow to mature, while T lymphocytes travel to the thymus. (Credit- aboutkidshealth.ca)

Bone marrow is thought to be a primary hematopoietic organ. However, accumulated evidences demonstrate that active function and trafficking of immune cells, including regulatory T cells, conventional T cells, B cells, dendritic cells, natural killer T (NKT) cells, neutrophils, myeloid-derived suppressor cells and mesenchymal stem cells, are observed in the bone marrow. Furthermore, bone marrow is a predetermined metastatic location for multiple human tumors. In this review, the immune network in the bone marrow. Bone marrow is an immune regulatory organ capable of fine-tuning immunity and may be a potential therapeutic target for immunotherapy and immune vaccination.

There are TWO TYPES of bone marrow, MYELOID TISSUE OR RED BONE MARROW and FATTY TISSUE OR YELLOW BONE MARROW. Capillaries and other blood vessels fill both types. RED MARROW is usually present in the BREASTBONE, SKULL, RIBS, VERTEBRAE, HIP BONES, SHOULDER BLADES, AND THE ENDS OF LONG BONES. YELLOW MARROW exists IN THE CAVITIES OF LONG BONES. (source- facty.com)

Red bone marrow contains hematopoietic stem cells, which produce blood cells. This type of marrow is one of the major tissues of the lymphatic system -- immature progenitor cells in marrow develop into the various types of white blood cells. Lymphocytes form in red marrow, then travel to the lymphoid organs to mature. The liver, spleen and red marrow destroy old red blood cells and replace with new one.

Bone marrow examination helps diagnose diseases of the blood or blood-producing organs through evaluation of iron stores and blood production.

At the end, scientists and researchers might have their own view and judgement for high and low important with any of these soldiers of our IMMUNE SYSTEM. But in general, they are working together ( naturally ) in such a great efficient and effective coordination and plays very important role in support of each other, like a team work, in ONE objective- protecting our body from pathogens / foreign objects.

Human body is a great mechanism, working by naturally. Regular exercise and making a habit of eating healthy food, will support your body to creat healthy and strong IMMUNE SYSTEM in protection from pathogens / foreign object.

Thanks for reading ! Hope you enjoyed reading our blog.

Please note that all information about on our immune system, provided herewith are purely a general information and children education purpose. Reader should take medical advise from qualified medical professional for their specific questions and concern.