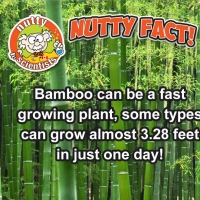 The scientific facts:  How can bamboo grow that fast? Bamboo plants create all the cells they need to grow when they're still little buds. Unlike in animals, these cells don't have to split apart while growing; they simply streeeeetch out. In other word (Per cell biology), Bamboo’s cells grow, not by division, but by elongation. That elongation can occur much faster than if it occurred by mitotic (mitosis) cell division. Bamboo cells are filled with water and cause them to expand quickly, like a balloon on a faucet filling with water.

Bamboos have long been considered the most primitive grasses, mostly because of the presence of bracteate, indeterminate inflorescences, pseudo spikelets and flowers with three lodicules, six  stamens, and three stigmata.

Bamboo has traditionally been used into the wide ranges, from everyday household utensils to musical instruments, from a writing pen to weapons, from construction to textile, from medical use to fuel. Bamboo have been considered a very useful plant to human, animal and even mother nature, too.

Isn't it interesting to know about BAMBOO PLANT ?

Have a Happy Reading!